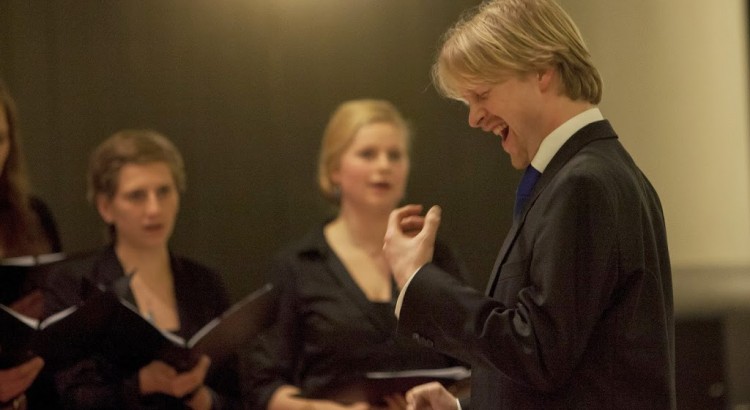 David van Roijen studied Choral Conducting under Louis Buskens at the Prince Claus Conservatoire in Groningen. After graduating in 2008, he followed masterclasses with Fred Sjöberg, Joop Schets, Jan Stulen, Geert-Jan van Beijeren and Arnaud Oosterbaan, among others. He was also coached by Hoite Pruiksma.

David discovered his love for choral music around fifteen years ago, as a singer with the Gica student choir. He has now been their conductor for five years, performing several programmes with them on a variety of different topics, and in 2014 he and the choir took part in the International Choir Festival in Cork, Ireland. Before being appointed conductor of Gica, David sang solo with the choir on several occasions: the baritone solo in Fauré’s Requiem (2006) and in Bononcini’s Stabat Mater (2010).

David is the founder and conductor of the vocal ensemble A Capelli, which won the 53rd Zang- en Muziekfestival (Festival of Singing and Music) in Schiermonnikoog in 2010. In 2011, the choir won a Golden Diploma at the International Choir festival in Wernigerode, Germany. And in 2014, the choir celebrated its first anniversary with a performance of Handel’s Ode for the Birthday of Queen Anne, along with a commissioned piece inspired by Handel’s oeuvre, composed by composer Chiel Busscher and lyricist Joost Oomen. A Capelli performed Liszt’s Via Crucis during the 2015 Passiontide. The choir is currently working on a programme entitled The Poetry of Love.

David initiated the semi-professional female voice choir, La Fiamma. This ensemble, in which both professionals and amateurs alike sing together and learn from each other, mainly performs contemporary classical music. The choir has now given two concerts, the last of which featured Britten’s A Ceremony of Carols.

David is also conductor of the Leeuwarden Vocal Ensemble, as well as being directly involved with the organisation of various singing projects in the Noord-Nederland region. David has also enjoyed his role as conductor of the Korrewegwijk neighbourhood choir in Groningen for several years.

Gica is a friendly student choir from Groningen. The choir has been around for fifty years and during that time has sung a wide variety of classical music. The name Gica is an abbreviation of Gaudete In Cantando (rejoice in singing), and that's what we do: every Thursday evening and during the two or more concerts we give each year.